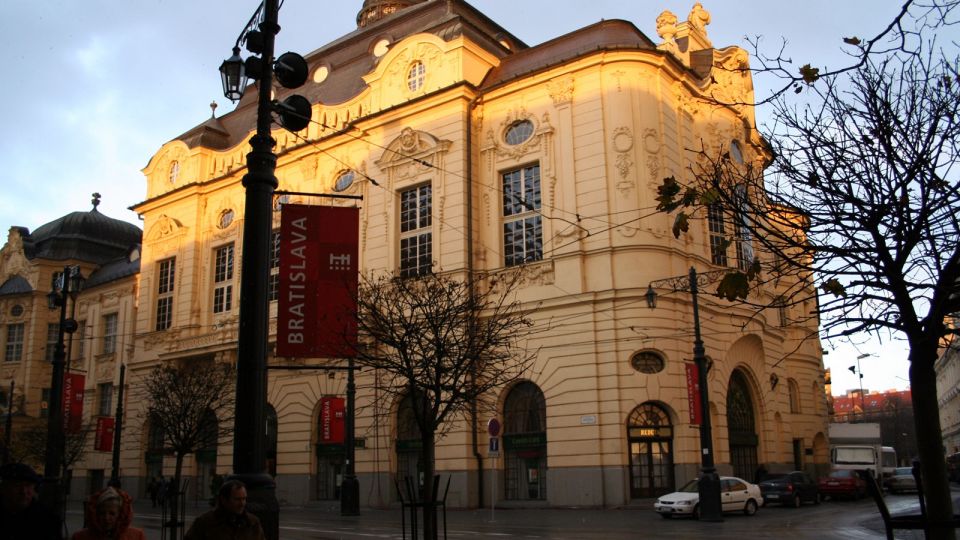 At the direction of Empress Maria-Theresia, the »Schüttkasten« (Literally: Box to pour something in) was built between 1773 and 1774 in Bratislava. It was a purely functional building, which should be able to supply the city of Bratislava with grain. Ultimately, the bulkhead was a relatively modern-style building, which has offered space for 160000 »Metzen« grain. It should have been converted to approximately a volume of 3200000 liters. (The unit of measurement »Metzen« was then defined very differently depending on the region.) Through a ventilation the grain was kept fresh accordingly.

Shortly before the First World War, in 1911, the city of Bratislava decided that the construction was no longer needed for the actual purpose. They wanted to dedicate the building to a cultural purpose. However, there was no satisfactory solution, because the grain warehouse was suitable for any of the ideas really.

The »Schüttkasten« was finally demolished in 1911 and it was decided to build a new building for cultural purposes. With this new building for today's Reduta one started in the year 1913. However the construction delayed then because of the beginning of the first world war in the year 1914. The planning faltered and the construction site survived the world war. Only after the end of World War I was the new building erected in 1919. The Reduta of Bratislava is about 100 years old.

Headquarters of the Slovak Philharmonic

In the »Reduta« in Bratislava, a concert organ was installed in the great hall. In addition, some club clubs and one of the first cinemas of Bratislava were housed in the Reduta. After the Second World War, the building was then taken away from the city of Bratislava and nationalized. Since 1949, the Reduta is also the headquarters of the Slovak Philharmonic.

Back to Culture in Bratislava