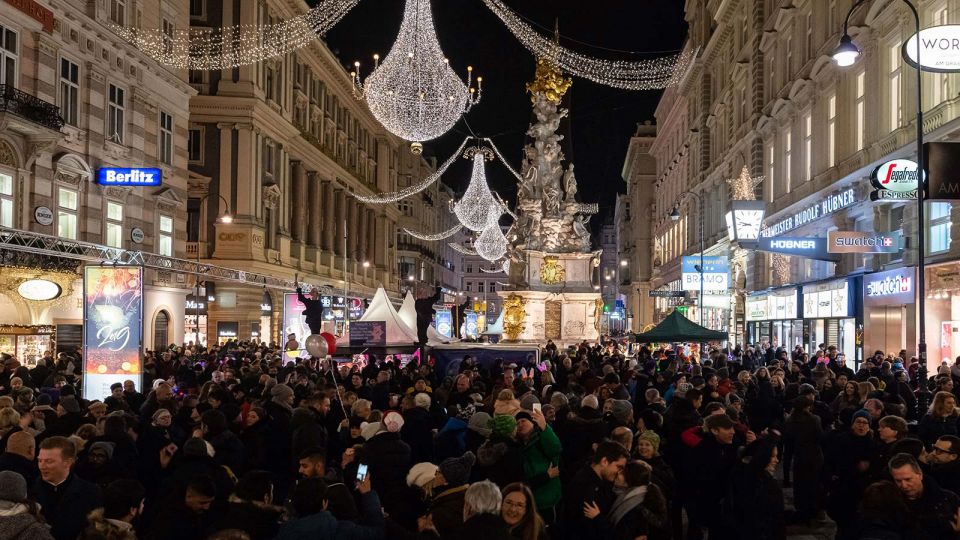 The Wiener Silvesterpfad (Vienna New Year's Eve Trail) is an institution in the Austrian capital. An extensive program is offered along the New Year's Eve path. There is a big fireworks display at the Rathausplatz, the largest open-air ballroom in Europe can be experienced at the Graben in the night from December 31st to January 1st. A corresponding children's program is also offered. RegioTours has put together the most important facts about Vienna's New Year's Eve Trail.

Subway, tram, and bus for New Year's Eve in Vienna

The subway runs continuously from December 31 to January 1. During the time the New Year's Eve Path is running, all subways run at least 6 times an hour in all directions, i.e. every 10 minutes. After that, the beat is extended to 15 minutes and continues uninterrupted into the morning hours.

Numerous trams are also in use on New Year's Eve in Vienna and offer a timetable with a cycle of 10 or 15 minutes. Only the buses mostly stop driving at night.

Facts about the New Year's Eve Trail in Vienna

Afterward, the responsible departments of the city of Wiemn immediately start cleaning up at around 2 a.m. with over 100 employees. This also means that practically nothing of New Year's Eve and the festivities can be noticed in the center of Vienna on January 1st.

More than 10 public toilets are available along the entire Vienna New Year's Path. They are marked accordingly with signs.

The New Year's Eve path from Vienna can be seen on the map of the city of Vienna. All stations are marked on this map. In addition, all first aid facilities are shown and the toilets can also be found on the map.

The program spans 12 stations, 10 of which are in the city center. In fact, there is an 11th stop in the Prater (2nd district) and a 12th stop in the Seestadt Aspern, a new residential area in the city of Vienna.

Most of the New Year's Eve Trail takes place in downtown Vienna. Here 10 stations are set up where a colorful program from music to artistic institutions to children's programs is offered. Highlights are above all the large fireworks above the Vienna City Hall and the station on the Graben, where the largest ballroom in Europe is set up on New Year's Eve. The music program is varied and different music styles are offered in different places.

We have made a detailed map available for download. You can also see and use the map online.

From 8:00 p.m. there is a DJ from Radio Vienna on the Riesenrad-Platz in the Vienna Prater. At midnight there is a 12-minute firework display that is fired in time with the music. On January 1st at 11 a.m. the New Year's Concert of the Vienna Philharmonic Orchestra will be shown live on Riesenradplatz. The performance of "The Nutcracker" is shown at 5 pm.

The New Year's Eve party in the seaside town of Aspern, which can be reached with the underground line U2, is family-friendly and child-friendly. There are play stations and make-up stations for children, a children's opera is performed and there is a live broadcast from the Vienna State Opera. There are no fireworks here.

Back to Tourism & Travel in Vienna